This elegant new-build in London’s Balham originally had only a simple patch of lawn at ground-floor level, and a small paved area outside the basement.

We worked to transform the bland outlook from the kitchen and living room with a feature wall made from sensational tiles designed by the Italian company Botteganove.

The tiles’ subtle colours and textures were the inspiration for Stefano’s planting plan, so that in spring the new leaves of Cercidiphyllum japonicum – the Katsura tree – match their subtle pinks, the bronze tiles are echoed by Anemanthele lessoniana, an ornamental grass, and the deeply veined surfaces of Rubus lineatus leaves seem to reflect the tiles’ incised pattern.

Borders around the lawn’s perimeter are packed with a simple and repeated pattern of little mountain pines, Pinus mugo ‘Mughus’ to give structure, softened by the dark, feathery leaves of Anthriscus sylvestris ‘Ravenswing’ and swaying seedheads of Melica uniflora ‘Alba’. Epimedium ‘Orange Queen’ and the fresh, spiky leaves of Helleborus argutifolius draw the eye in spring, and Astrantia major, Geranium ‘Rozanne’ and Libertia grandiflora lend their colours to the scheme in spring and summer. We gave more structure to the planting by punctuating it with terracotta pots by Atelier Vierkant, a brass pot by LVIV and three Osmanthus burkwoodii.

The terrace at the garden’s far end creates a generous space for entertaining and alfresco dining. We laid it from slabs made from lava gathered on the slopes of Mount Etna in Sicily and fired at 1200 degrees by Nova Sicilia. Some contain metal particles, which gives them an interesting blue tint. The table, bench and chairs, made from timber and black, powder coated aluminium, are part of the RAW collection by Gloster.

A carefully selected trio of multistem trees screen the garden – Amelanchier lamarkii with its spring blossom, Cornus kousa, which bears flowers in early summer, and Cercidiphyllum japonicum to fill the air with the scent of candyfloss as its leaves turn in autumn. At night the garden is lit with uplights under each of these trees and downlights on the wall.

Another sensational feature wall from Botteganova tiles transforms the space at basement level, where we smothered the walls with Holboelia latifolia, with its delicate scented flowers in spring. 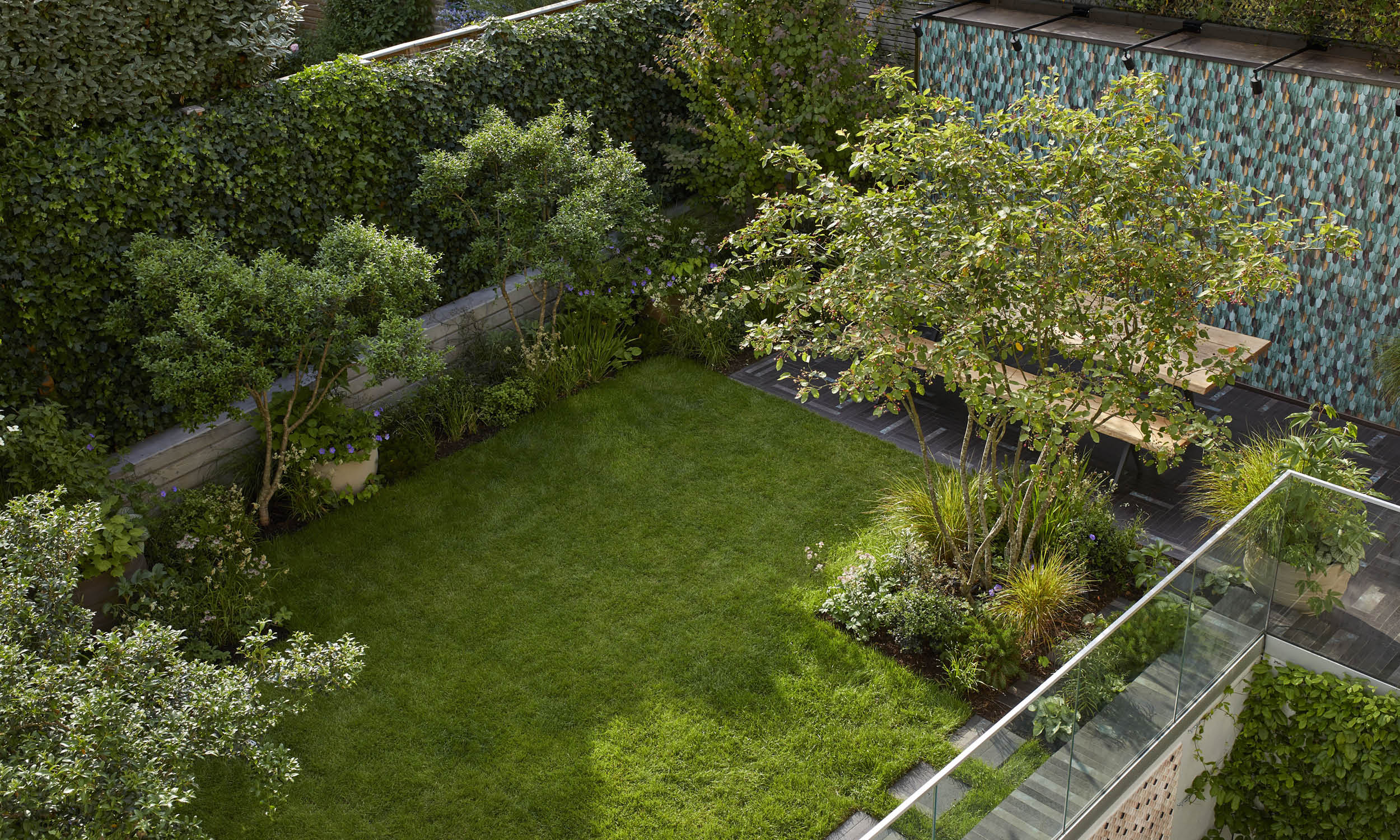 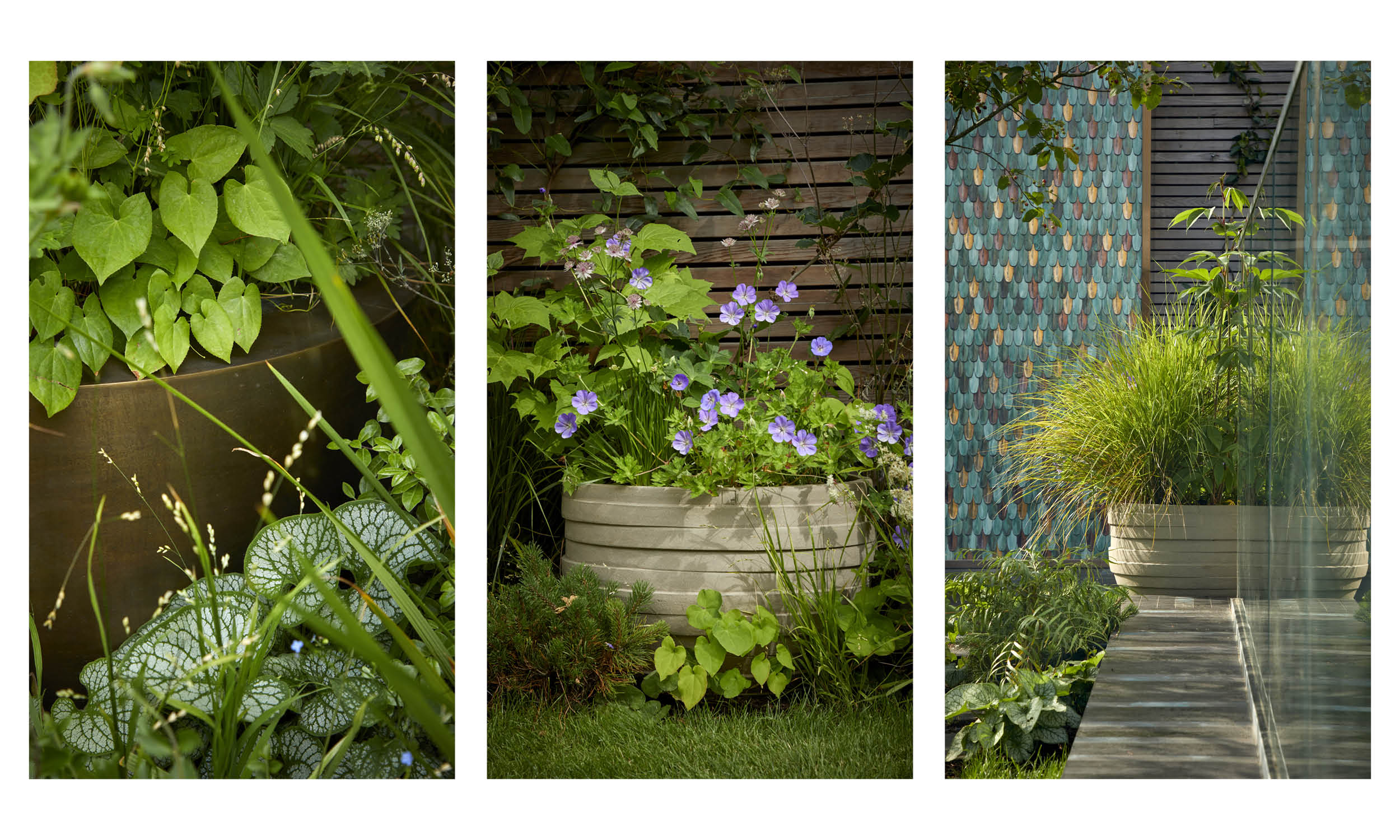 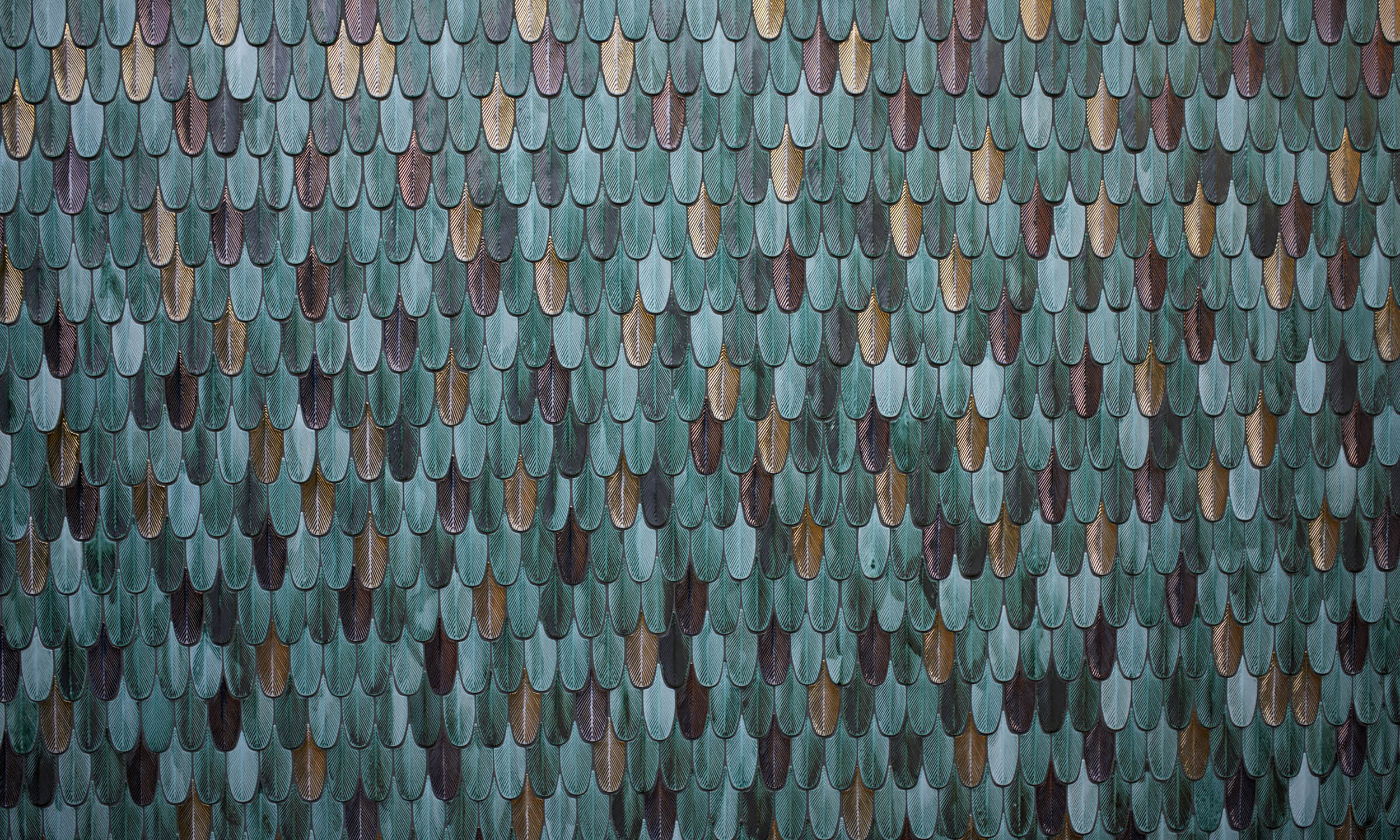 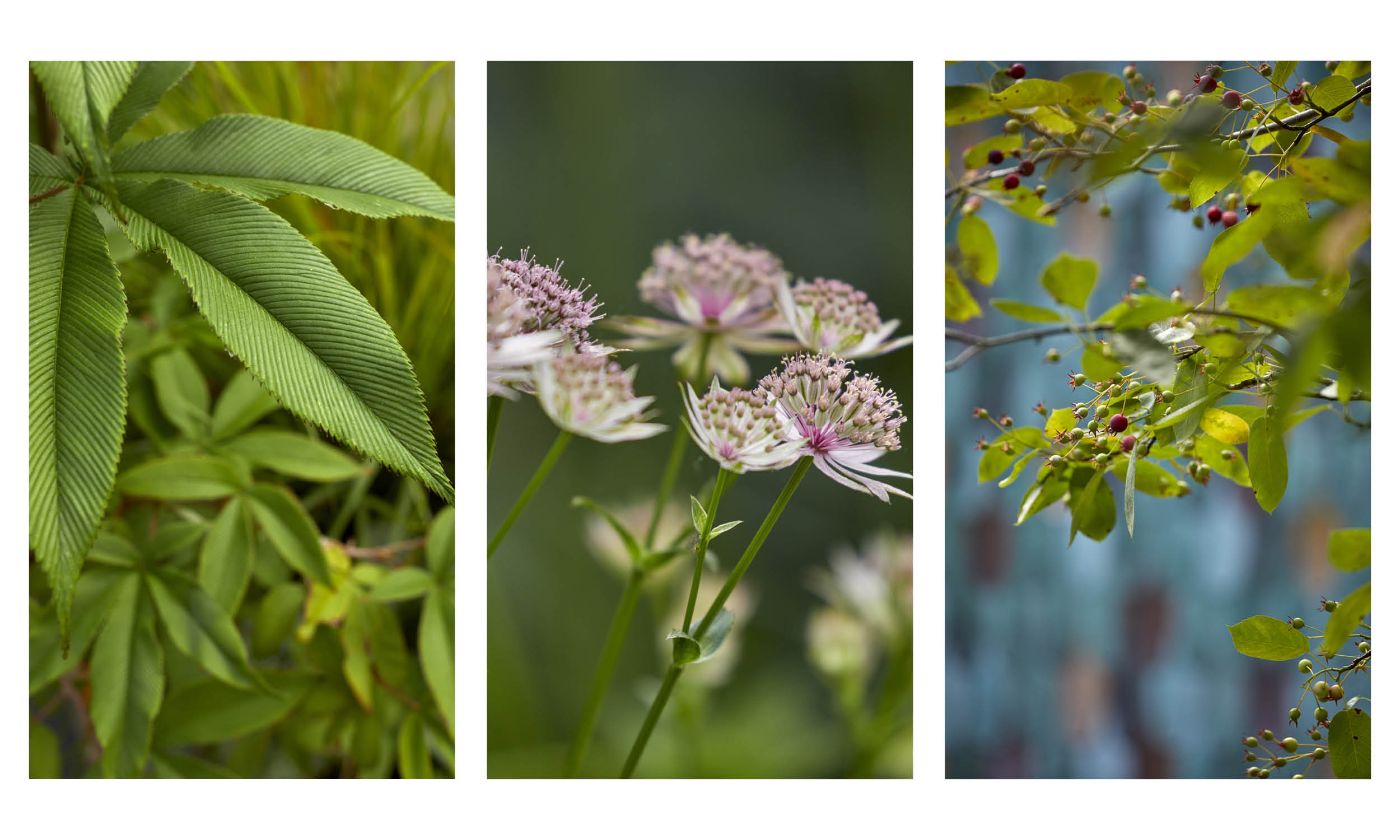 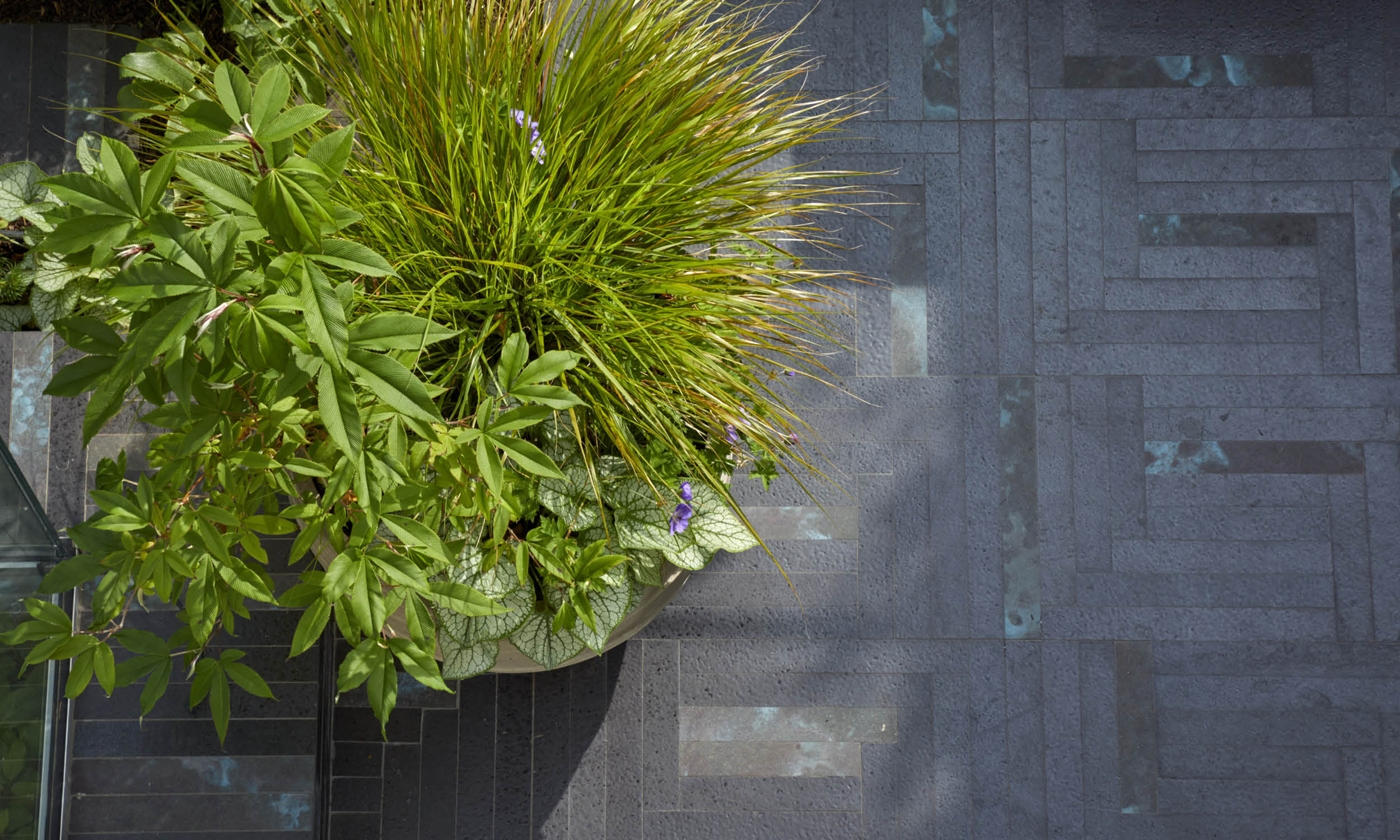 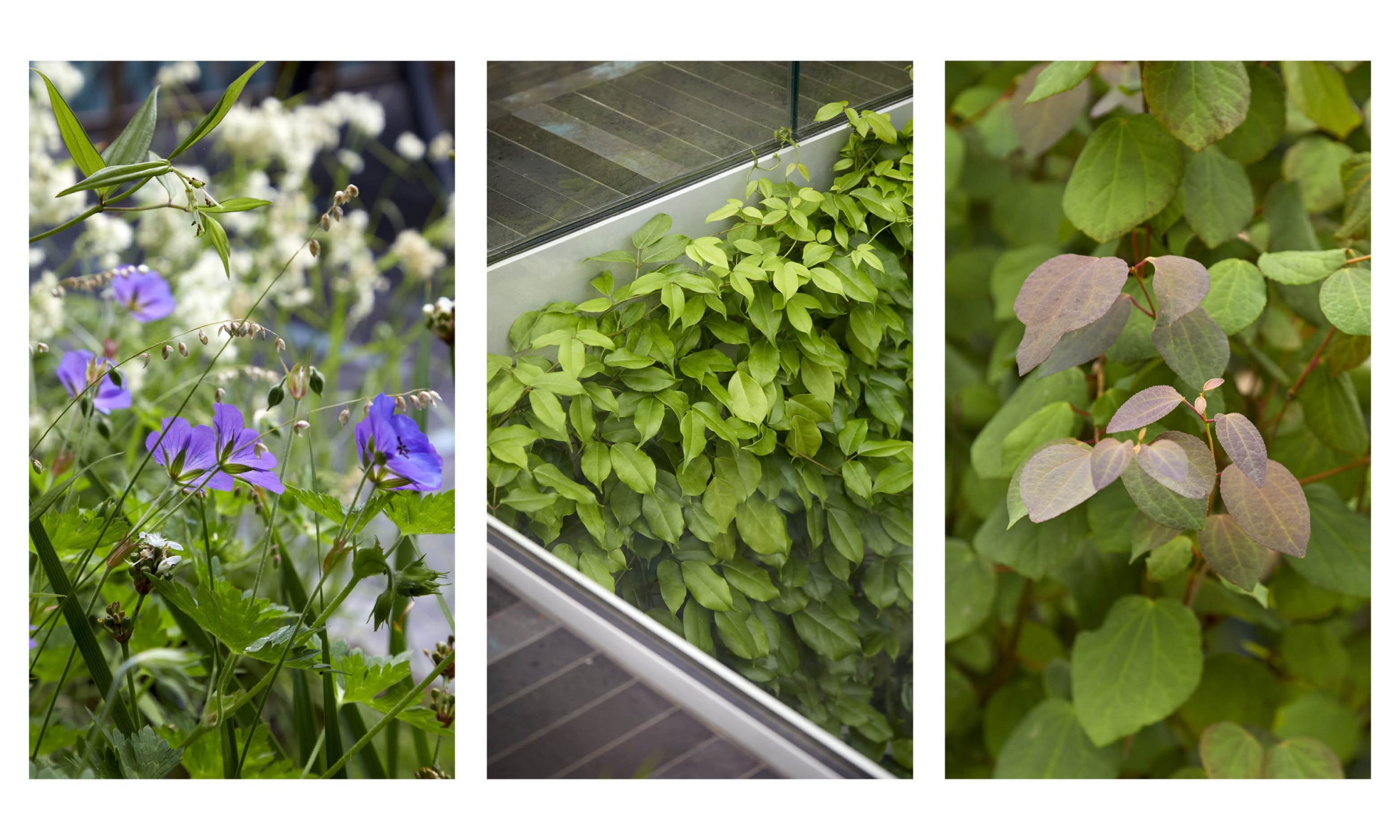 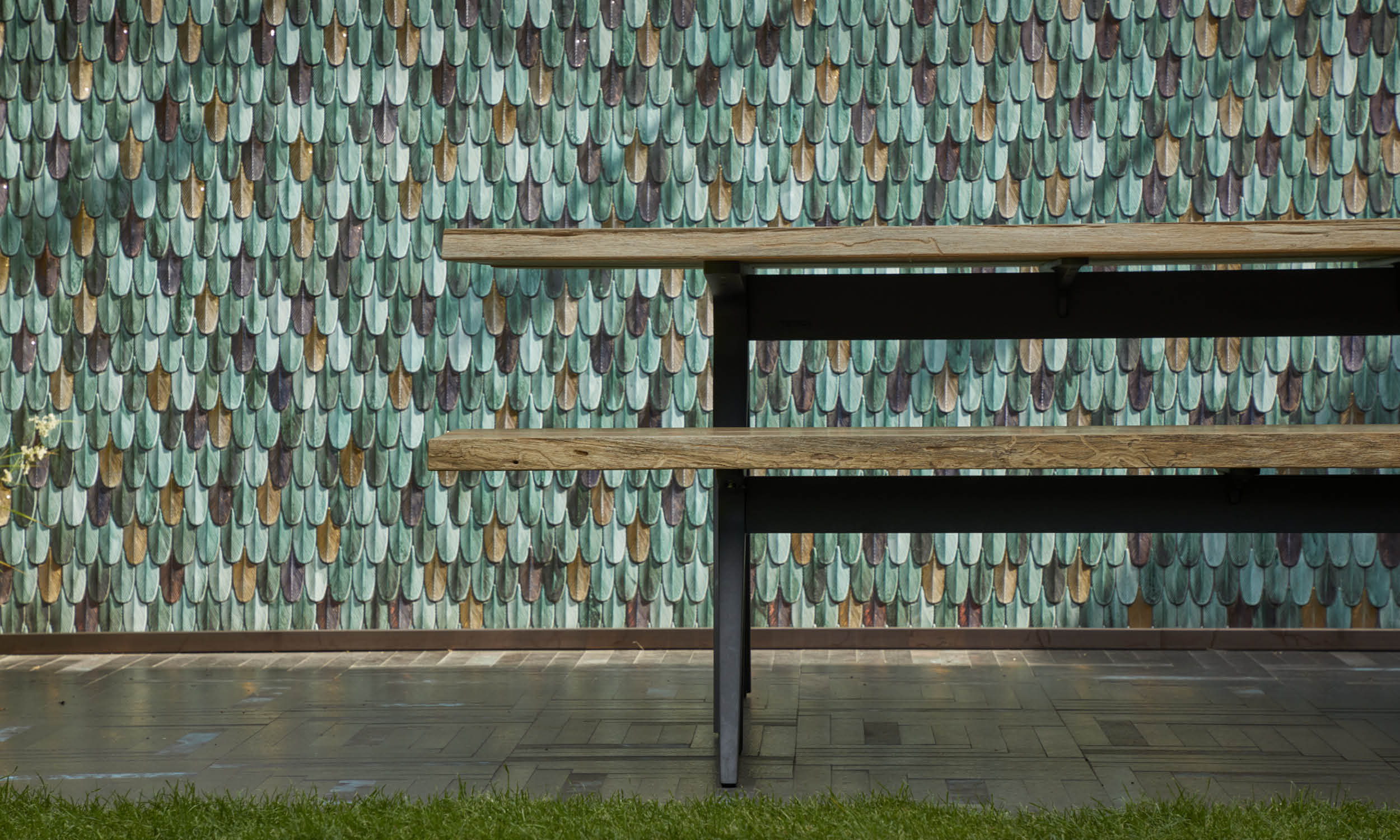 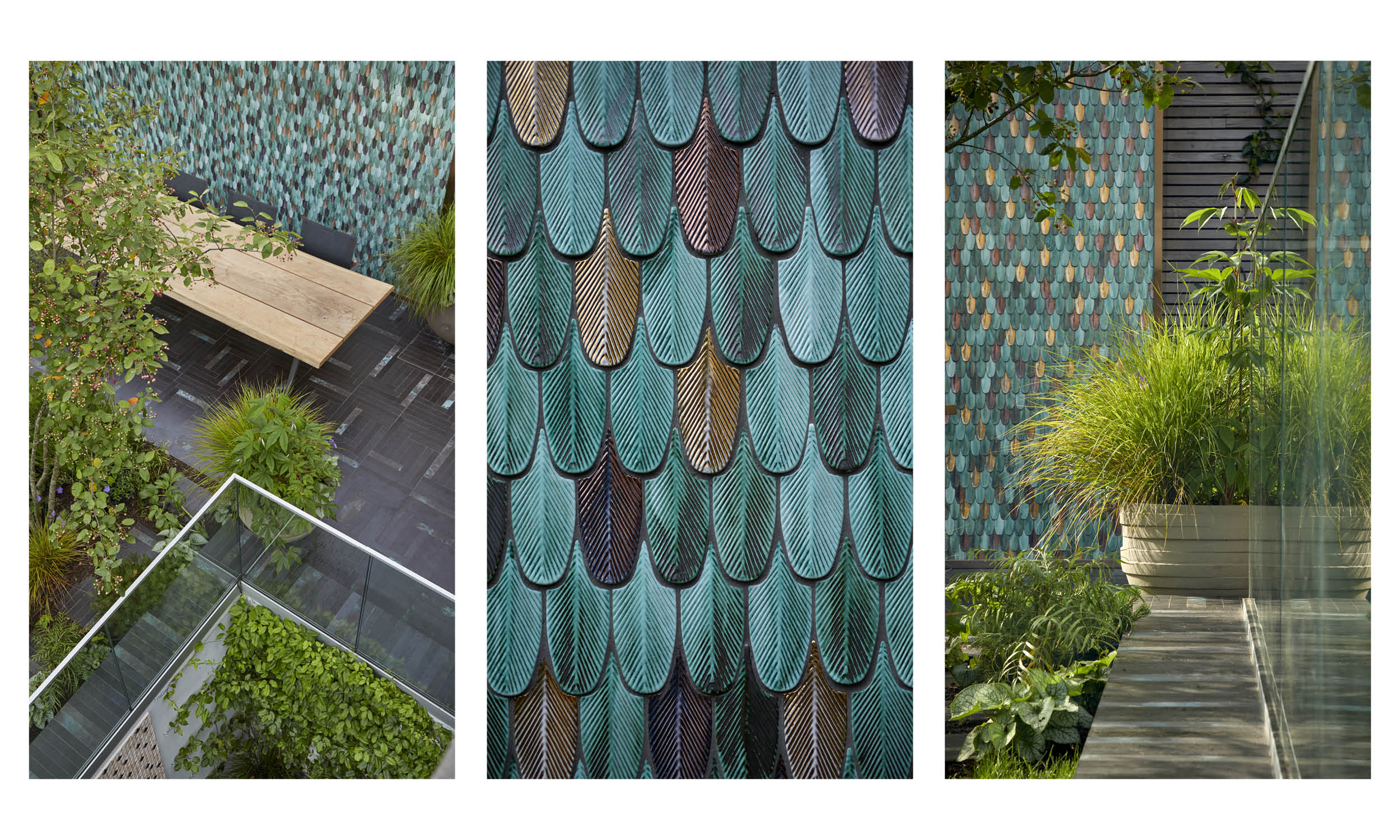 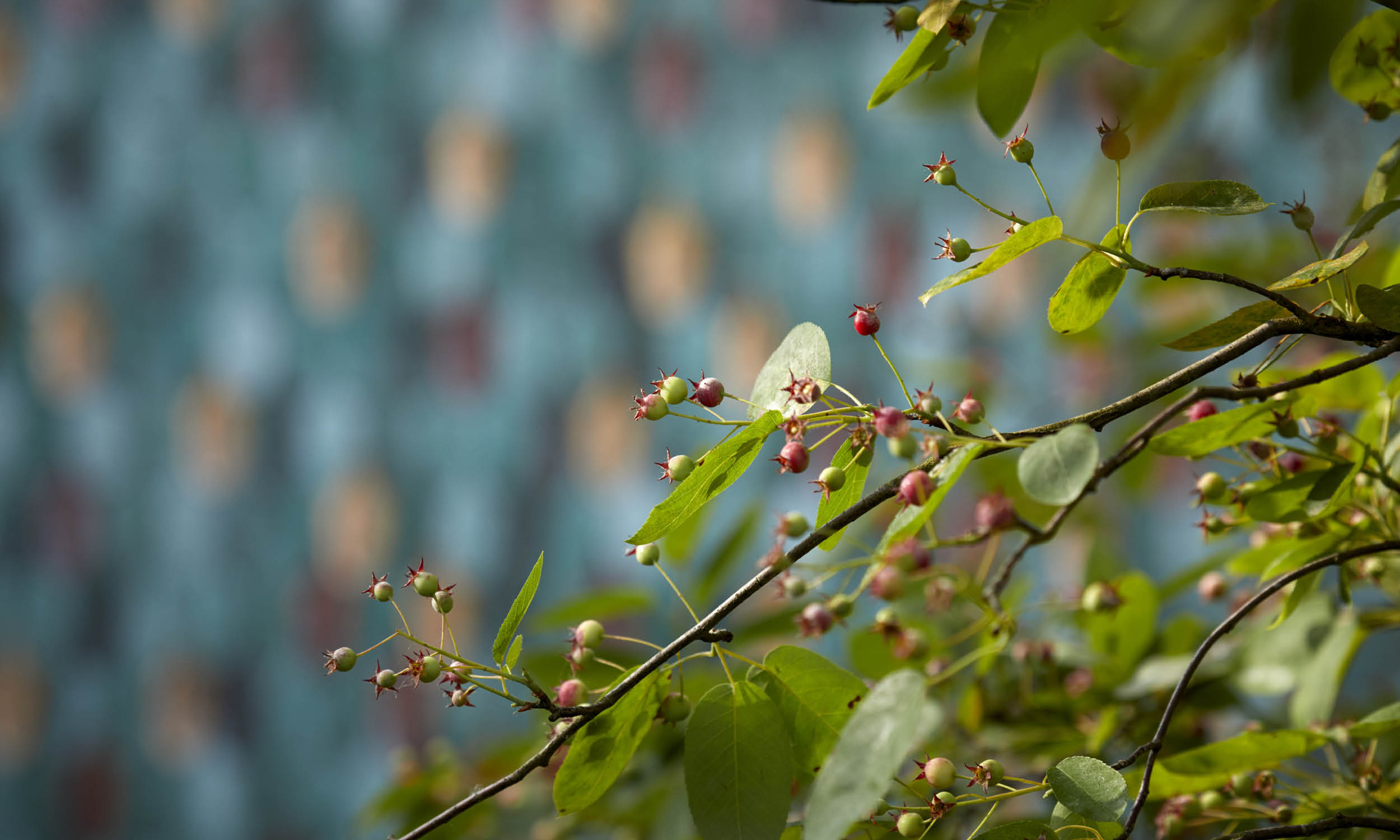 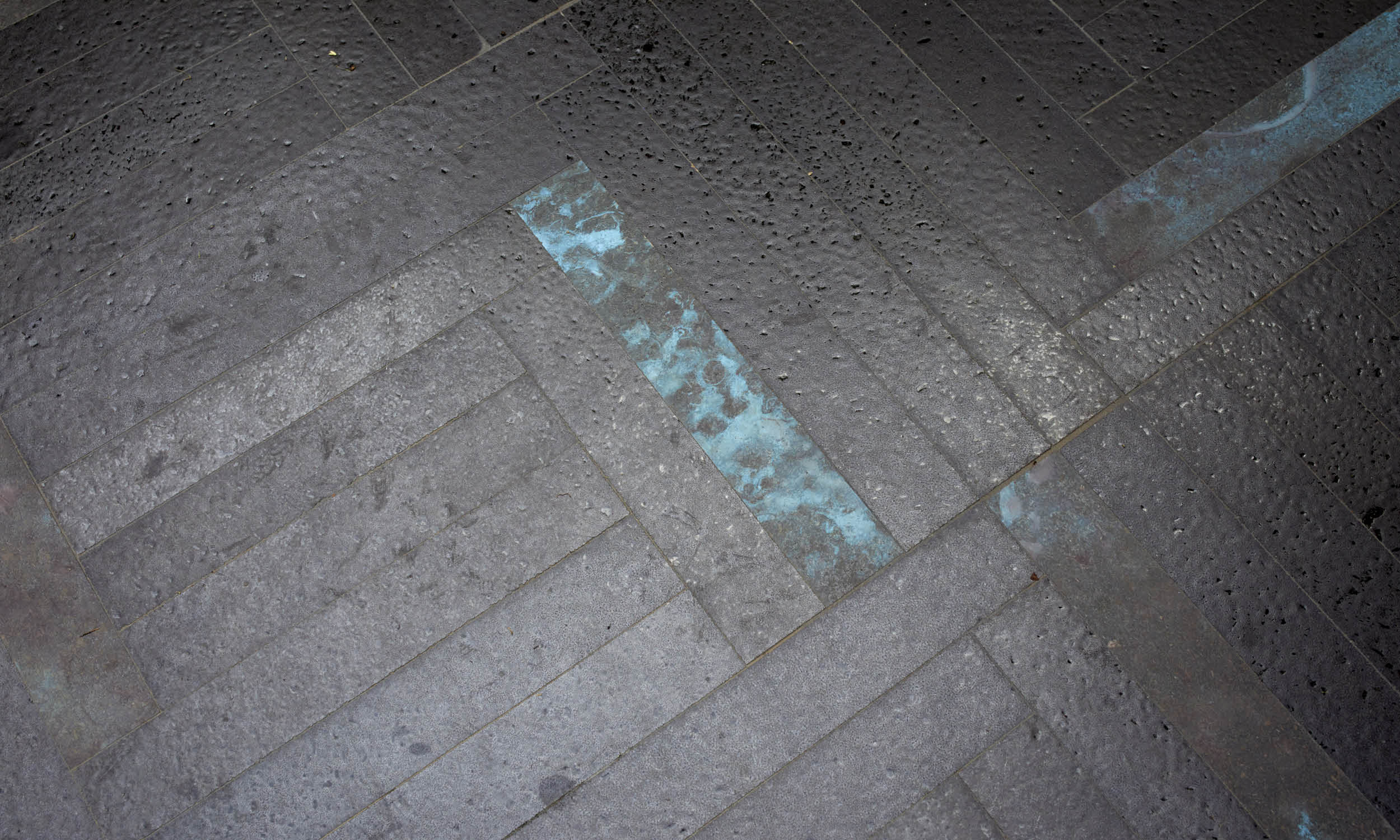 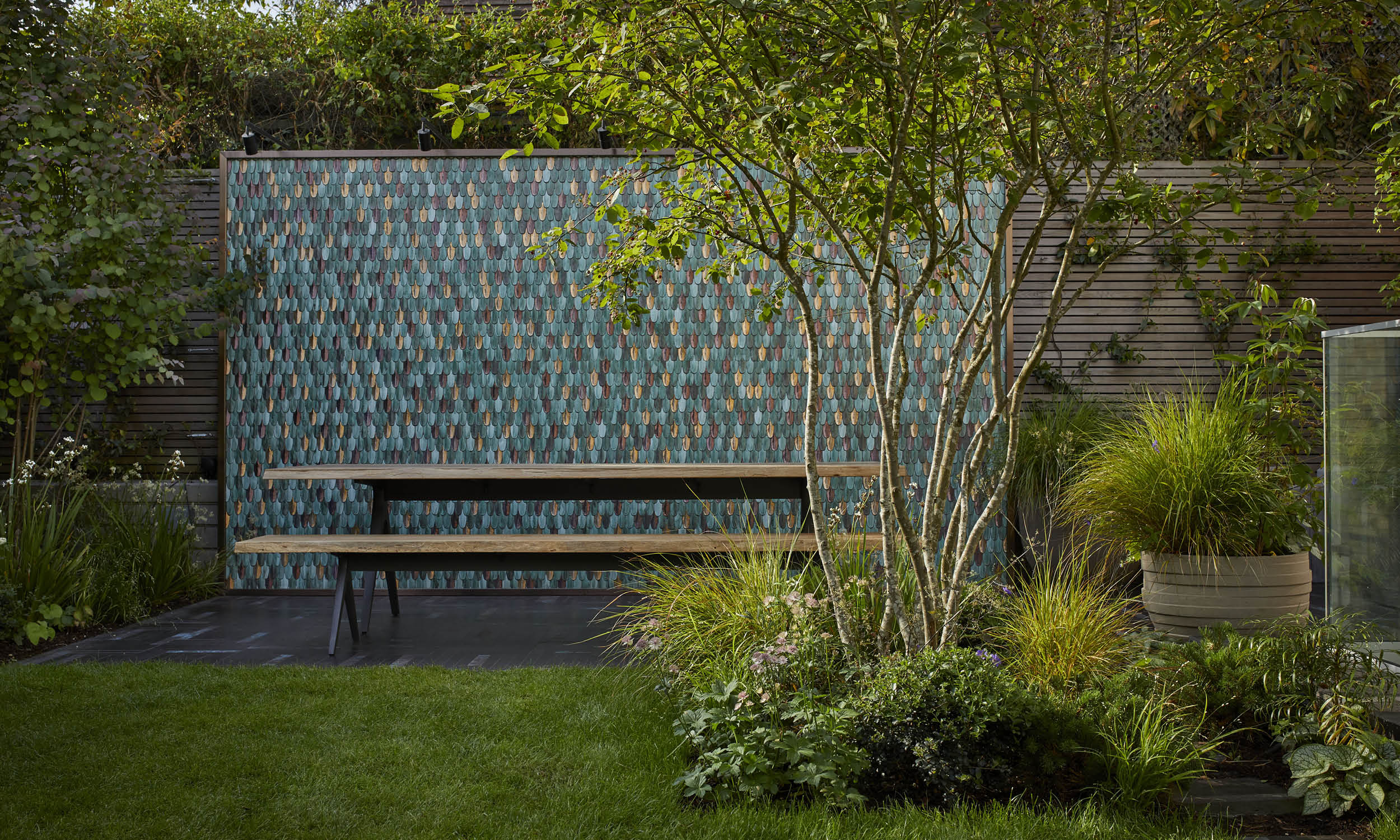 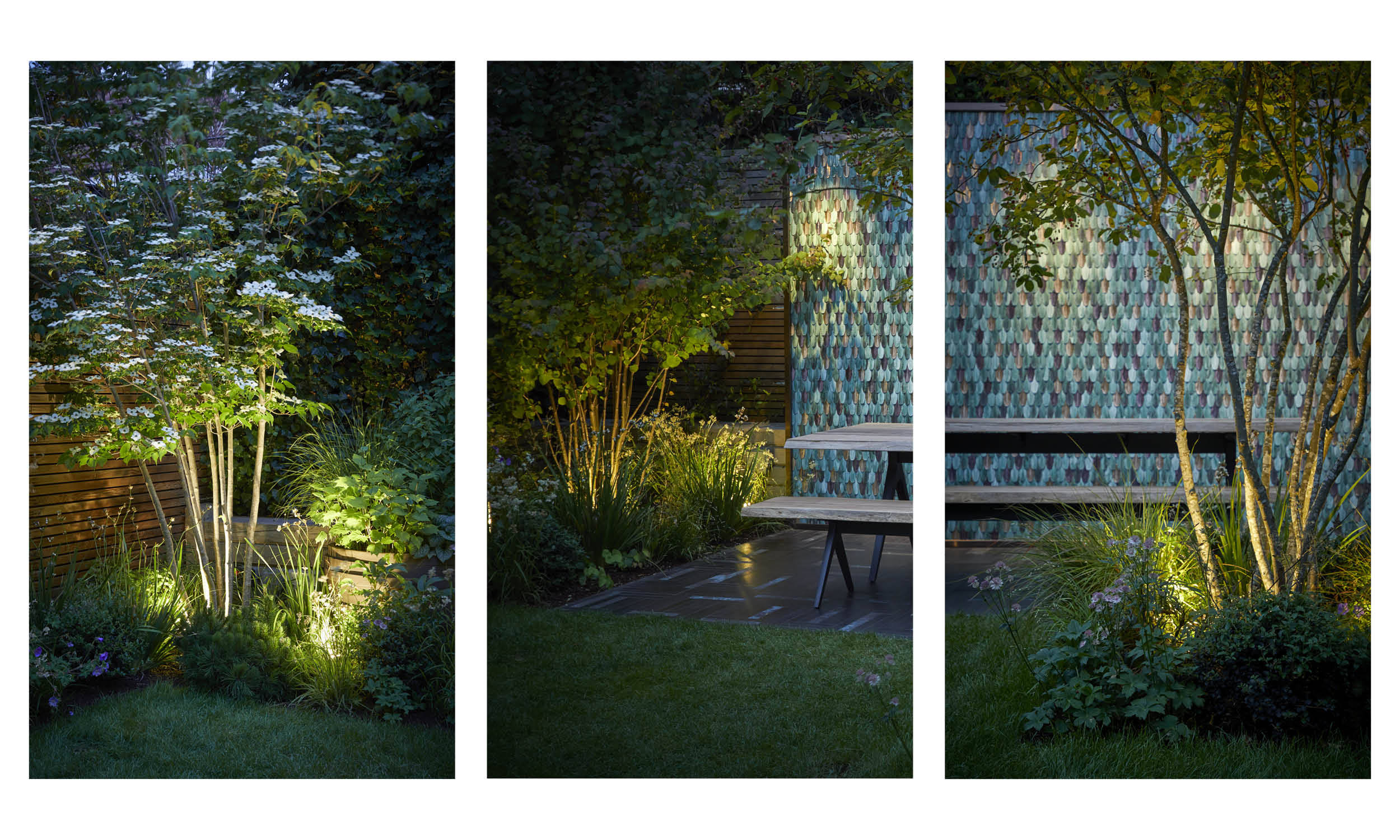